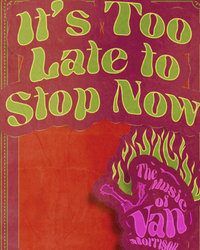 “It’s Too Late to Stop Now” is performed by a group of 7 highly experienced musicians lead by Matt Weidinger (soulful singer/songwriter and multi-instrumentalist). Joined on stage by his Hammond B3, they create an extraordinary evening which features music from many of Van the Man’s extensive song catalogue including some of Van’s early work to those of his later years. Come out and watch this show as Matt and his band touch the souls of each of those in the audience allowing them the opportunity toshare his passion and that of the band members.

“Young Matt Weidinger is an old soul. Steeped in real-deal rhythm & blues, blues, and soul music from his earliest years, he is renowned for his blue eyed soul vocals, guitar playing, and prowess on the Hammond organ. Matt’s 2018 Registry Theatre amazing concert of the music of Van Morrison was a season highlight, with its rich, authentic take on a genuine music icon. The concert such a hit that Matt will be back next season for Van The Man Volume 2. “

"Matt has carefully hand-picked and researched every Van Morrison song and then lets his well-rehearsed band take you on a musical journey through the pages of Van Morrison’s piece of music history. See this show! Your ears WILL believe it!