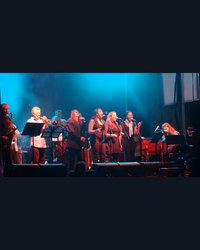 They come together to celebrate the music that Joe Cocker and Leon Russell threw together to fulfill a tour that almost didn’t happen. Cocker’s English band was not allowed into America, so at the last minute he asked Russell to assemble a group of musical all stars for a tour. Joe asked the right man, as Leon was one of the most connected studio musicians and songwriters in L.A. Part of the ‘Wrecking Crew’.