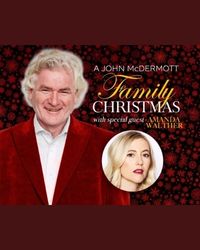 Join Canadian tenor John McDermott and his special guest Amanda Walther as they deliver holiday cheer and make a stop at Gravenhurst Opera House on Saturday, December 10th at 3:00 pm. As is John's tradition, he will sing holiday favourites, songs from his illustrious musical career, and tasteful Remembrance tributes. John is a Scottish-Canadian tenor who has released more than 40 albums over a 25+ year career. Starting in his parent's rec room singing for friends and family, he went on to record his first album, "Danny Boy", which went double platinum. Since then, John has toured extensively throughout Canada, the US, and internationally and his television specials have aired in Canada and the USA. Also known for his many charitable contributions and especially his work with veterans, John formed McDermott House Canada which donated $1.2 million to transform the Palliative Care Unit in K1E Veterans Centre at Sunnybrook Health Sciences Centre. The mission is to promote the highest quality of life for Veterans, Military, First Responders and community patients facing the final stages of a terminal illness. https://mcdermotthousecanada.org/